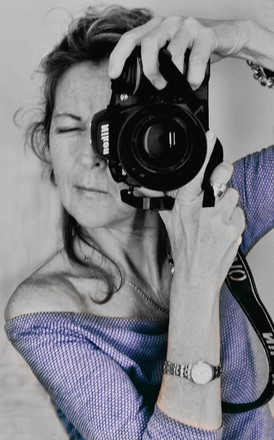 UK born Amanda Baker landed in Tortola in June of 1988 as a member of  three man sailing yacht delivery crew. For the next ten years she embarked on a career as   joint owner / operator of S/V "Gypsy Wind" a luxury charter yacht based in the V.I. During this time she pursued her love of photography documenting the islands around which she sailed. She established Virgin Portraits in 2001 and since then has become well known for wedding, portrait and lifestyle photography in the British Virgin Islands.

However, Amanda is probably most known for her collection of photographic art work featuring the British Virgin Islands. This collection keeps growing and she retails and wholesales this artwork in it's many different hues and forms via her dedicated Gallery "The Allamanda Gallery" located in Tortola as well as online.

Amanda's images have been published in numerous publications including; Caribbean Travel and Life and Destination Weddings and Honeymoons Magazine. In 2004, Amanda was commissioned to photograph actor Morgan Freeman for his book "Morgan Freeman and Friends, Caribbean cooking for a cause". Her portraits of Morgan are featured inside the book and on the cover. Amanda's wedding clients include Wal-Mart tycoon Rob Walton, Manchester United Star Rio Ferdinand, Actor Daniel Sunjata, to name a few.A commission by the Royal Mail in 2008 to photograph the JR O'Neal Botanic Gardens for a set of Royal Mail Postage Stamps. These are now available for sale at the BVI post office for postal use or collectors.